We Are Here To Serve You

Kevin Hinzman and Craig Flory formed Hinzman & Flory in 1999, dedicating their firm to the proposition that all people deserve strong and effective legal representation. In the adversarial world of criminal law, Kevin and Craig believe it is important for their potential clients to know where they have placed their priorities as lawyers throughout their careers.

Both have devoted their entire professional lives to the defense of accused, rather than their prosecution. Neither have ever worked for the Denton County District Attorney or any other prosecuting authority. For over a combined 40 years, Hinzman & Flory have defended the constitutional rights of the people of Denton County and the State of Texas with passion and a firm commitment to the principles of the Constitution of the United States. Additionally, Kevin and Craig are extremely pleased that Hinzman & Flory can now offer immigration services through Of Counsel attorney Jered Dobbs.

Although Kevin and Craig didn’t form Hinzman & Flory until 1999, they actually met years before as freshman at the University of North Texas in 1987. They were both history majors who lived around the corner from each other in their dormitory. After graduation, they went their separate ways and lost touch for many years. As it turned out though, both ended up attending the University of Texas School of Law.

Here is some more about the individual attorneys of Hinzman & Flory: 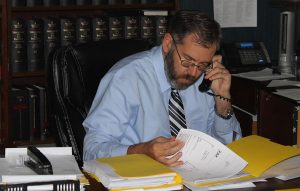 After graduating from the University of Texas School of Law, I worked for a year in Dallas on mass litigation cases involving Texas Instruments and Southwestern Bell, as well as an asbestos class action lawsuit. This experience gave me the motivation and confidence to start my own practice.

Having previously attended UNT, where I met my wife of 25 years, I knew Denton would be a great place to raise a family. So in 1995, along with our one-year-old son, we made the move back to Denton where I have built my law practice and raised my family ever since. We love Denton and could not imagine living and working anyplace else.

Having two sons who are 12 years apart keeps me young.  My oldest son just graduated from UNT in May of 2016, and is now a Second Lieutenant in the U.S. Army, while my younger son is attending elementary school at Immaculate Conception Catholic School.  For fun, I enjoy playing airsoft with both of them. 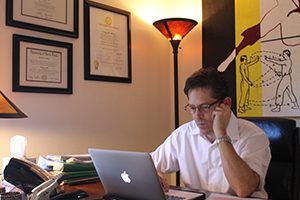 Growing up as the son of a career military officer, I always desired to have a career involving some sort of service benefitting our nation and its people. I began graduate school with an eye towards a PhD and a career teaching history before deciding that I wanted something more proactive.

My interests heading into law school were constitutional and civil rights law, as well as environmental law. During law school and for my first year after graduation, I was able to gain valuable working experience in these fields, handling employment discrimination cases with two different firms, and a short term project with an environmental law firm.

I also worked on several projects on a pro bono basis for the NAACP. The move to criminal law was a natural one, as I feel it is in many ways the cornerstone of civil rights law.

I love Denton and am proud to call it my home. For many years, I have been actively involved with volunteer work benefitting our tremendous music and art communities. 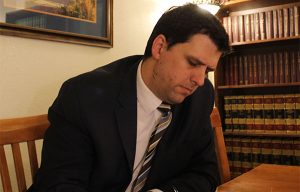 I have dedicated my career to assisting immigrants from all walks of life, regularly defending immigrants from deportation in immigration court and on appeal with the Board of Immigration Appeals, and I have also represented hundreds of families seeking permanent residence for loved ones through adjustment of status and consular processing, including cases involving complex waivers of inadmissibility.  Additionally, I have a great deal of experience in the field of trade and investor visas, having assisted many companies at all stages of development in procuring E-1 trader or E-2 investor visas for their employees.  I also have experience procuring L visas, TN visas, and other temporary employment visas for employers and employees.

When not at work, I enjoy spending time with my wife and son, participating in church activities, barbecuing, and watching football.  I have been on several mission trips, including to the South Texas colonias region, and to Guatemala. 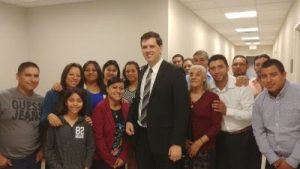 Jered celebrates with a client’s family after a big win at immigration court! 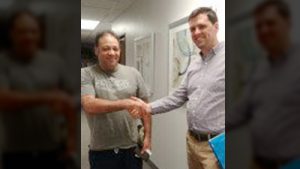 Jered at the 2017 Dallas Mega March for Immigration Reform 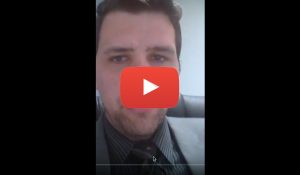 Jered Talks about Options for Immigrants in Deportation Proceedings 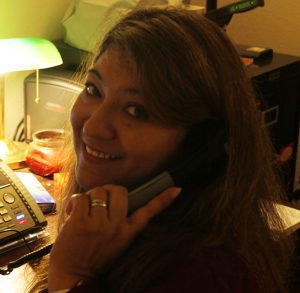 Mary Lou is an irreplaceable part of Hinzman & Flory who has gained a vast amount of knowledge and experience about the legal system during her long career working alongside Kevin and Craig.

Her accolades from both the clients of Hinzman & Flory and courthouse personnel are too numerous to count.  She is also an avid Baseball Mom.